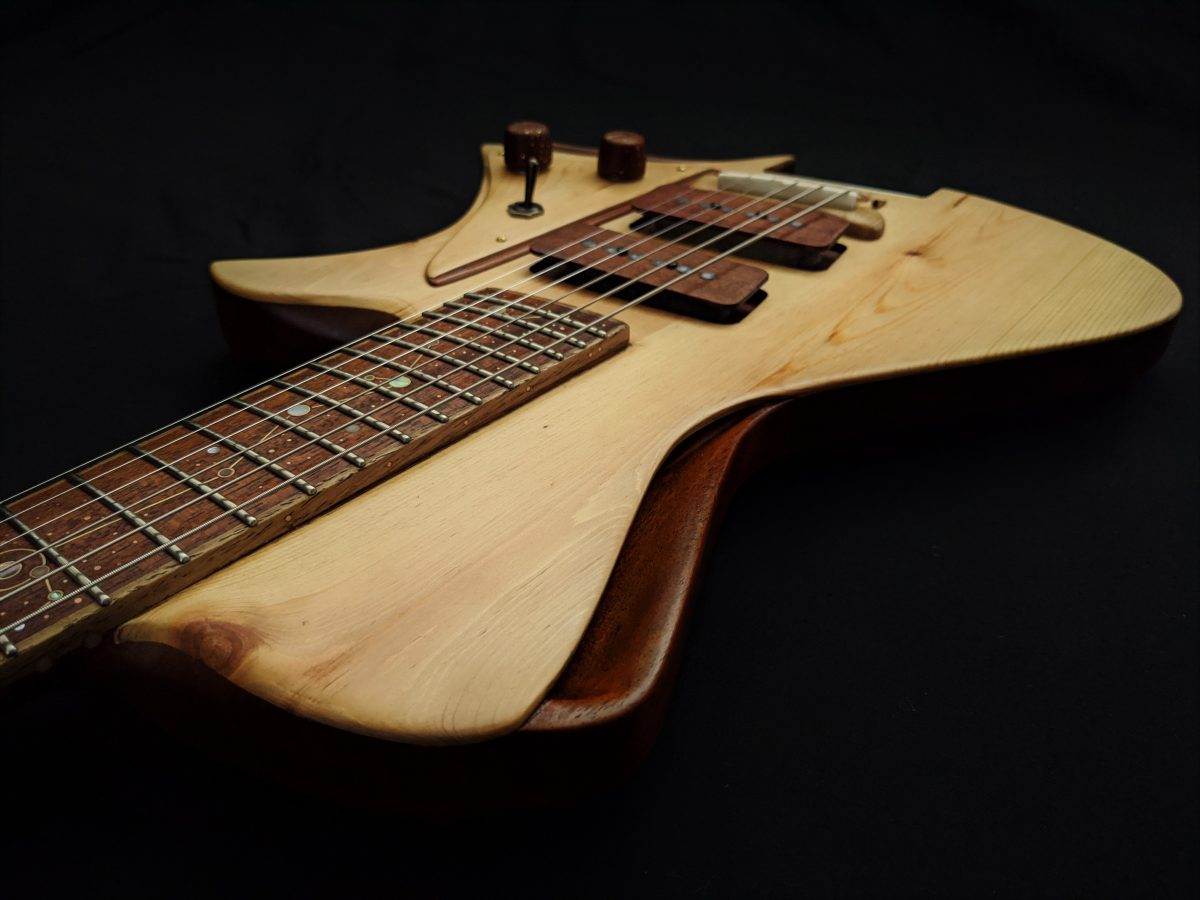 This guitar was designed and built for the 2020 Holy Grail Guitar Show (or the Holy Couch Guitar Show, as it became) Reclaimed Wood Challenge, the brief was to design and build a guitar using only recycled wood. Stuart explains some of the choices and thought processes that went in to this guitar and how you can get hands on one of your own.

What came first, the woods or the shape? The Shape, always the shape. I contemplated designing this guitar around the woods that I found, which I have done in the past (and I did to a small extent, with using a set neck construction instead of my standard through neck), however, I have always considered myself a designer first. So I decided I wanted to make the woods work with my shapes, not the other way around.

The shape actually combines two elements I had wanted to try for a while; the long upper shoulder, inspired by our Libra and Falcon designs, which adds a lovely solidity to an otherwise, thin-bodied, lightweight guitar. The other element was the leafed/layered control cover and sound holes. This  layered reveal adds some light hearted levity to the build. While I always try to build eye-catching instruments, my guitars are always meant to be functional, working instruments at their core. But for this one I wanted to play with something purely designed to add a fun aesthetic. Another nice feature to having the layered sound holes start at the edges of the body, is the reveal of the semi-hollow cavity design.

There is  a lot going on inside this guitar. As well as a full internal carve, this guitar features a unique centre block which accommodates a channel to connect both cavities whilst shielding the pickups from excess feedback. The block also has another function; this is a thin bodied guitar but I  wanted it to have a good acoustic presence, so I decided to add some reeds for acoustic amplification. This took a little experimentation as I had to be sure that I wasn’t just adding additional dead material into the sound cavity! The reeds are secured to the centre block and free to vibrate on all other sides. They have been painstakingly carved down to about 1mm (though technically they have a sort of logarithmic taper from the centre block) and were carefully tested on other guitars before being irretrievably attached in to the guitar.

We had long been talking about the virtues of reclaimed woods, so I already had a good stockpile of reclaimed sapele, mindi and a little oak. I could have easily made a solid body out of this, but that was not what I had designed. Most of my existing stockpile of wood comes from what I often refer to as my 92 stock. This is a wood I use a lot. You may have heard the story before but this wood was salvaged from my childhood house, built by my Grandad. I didn’t know my Grandad, but he was a carpenter who owned a building company and a lot of tools, some of which I am happy to say, now see use in my workshop. I acquired the wood from the porch and front door by chance as we no longer live there and it finds its way in to many of my commissions. It’s somewhat emotional for me to see it repurposed, however beyond that, it is good, strong wood, in long lengths that has been seasoning for about 50 years. I’d initially made a neck block for a through neck, using this and some oak left over from another project, but I decided that I’d rather this guitar be a set neck, to use up some of my shorter 92 beams.

For the top I  had wanted something to emulate a classic acoustic spruce top vibe, unfortunately, reclaimed Adirondack spruce is pretty hard to come by… However, finding some Victorian Scots pine roof rafters is not so tricky! I bought about 16′ of it, in the hope I could find a nice, knot free, nail free, quarter sawn section to book-match! Wishful thinking, I know. After a week of pulling nails, damaging planer blades and burning up my bandsaw, I decided I wasn’t going to find the perfect bit, so instead I opted to work with the flaws and the faults of the wood.

The body wood was somewhat trickier to find and, as it turns out, was hiding in plain sight. I originally had thought to do a compound body, made of oak and sapele, but I didn’t love the idea, I really wanted something with a continuous grain, like a solid table top. London is a great place for recycling wood, and everything comes with a story or two. We have a great many second-hand furniture shops and recycling plants, but I just couldn’t find what I wanted. I’d almost given up on this idea, when I stumbled on some boards in my Dad’s  garage. They didn’t look like much, some old frame doors and a counter, caked in shellac. It wasn’t until I cleaned them up a little that I realised, these were solid, quarter sawn mahogany. My mum thought they had been saved by my Grandad (who could never throw away a decent bit of wood, good man) from a renovation on a Victorian shop and had been the counter. I used this wood for the fretboard as well. It has this beautiful quarter sawn fleck to it, as well as a subtle, tight flaming in places as well.

It felt right, finding this wood. The fact that all the woods used had been previously used in construction tied in nicely with the heritage that made me want to work with wood and the family that helped me to become a guitar builder.

After putting all that work in to the design and sourcing the woods, it felt wrong to me just to drop a set of brand new pickups in. I feel I understand enough about pickups to know two things; one, I basically seem to like hotter pickups with Alnico 5’s and two, winding pickups sounds like a hassle. That said, I had always wanted to have a go, and this gave me the  opportunity to put in some additional reused materials.

Way back when I started building, my first ‘good’ guitar (or at least the first one I sold) had a set of overwound P90’s in, humbucking in the middle position. Despite my metal leaning, I’ve always liked P90’s, in fact, I don’t know a builder who doesn’t… P90’s are versatile, capable of warm jazzy tones (particularly in the middle), bluesy gravel and can even get a bit hairy as well. I kept the wiring simple, just adding a push pull to switch the phasing on the middle position. It adds a nice dimension. The bobbins are made from the body wood and were potted in a mix of new and recycled wax. Like this whole build, it took a long time, a lot of experimentation and a few re-do’s but the result was perfect.

Two warm and richly voiced pickups that absolutely sing when used harmoniously. The output of the pickups was around 7K and 12K respectively, they use Alnico 5 pole pieces and were carefully scatter wound.

I have decided I am not going to sell the original guitar. For one thing, this guitar needs to be seen, so I will be keeping it, center stage for all those exhibitions that I know will be forthcoming (eventually), plus I so rarely keep a guitar, and this project has a lot of, well, me in it. So the original guitar is staying with me, for now anyway. However, I am happy to announce, I now offer a semi-customisable replica of this guitar.

I have taken the decision to restrict options on this guitar (something I have never done on any other model, after all I am a custom builder).  I want to preserve the character of the build in a more cost effective way. This may seem strange but I build guitars to be played. I think an exact replica would just be too cost prohibitive, but I am offering upgrade options. I also have a limitation on the availability of reclaimed materials, particularly the mahogany for the body (although I have been lucky enough to find a source of repurposed (and Victorian) Brazilian mahogany).

This guitar will be identical in shape and construction but will be made from sustainably sourced, new and reclaimed woods. Every guitar will feature a neck from my 92 stock, and once that is gone, I will no longer make any more. The top and reeds will be made from sitka spruce (with an upgrade option to Adirondack spruce or Victorian pine). Your choice of fretboards and custom inlay. The pickups will be wound to a similar specification, but will be wound by the expertise of ERS pickups, with matching bobbins. Priced from £3899

Please  feel free to contact me (Stuart) on the details in my header!

Our workshop is based in North London we are not open to the public but if you would like to visit, you would be welcome, please do get in contact with me. In addition to custom guitars, I also offer a repair and modifications service.

‘Phee’ Performed by Calvert Stephens on his signature Falcon bass